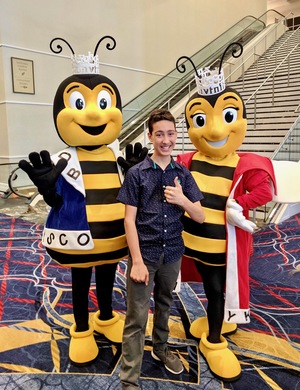 San Diego 8th grader from Inspire Charter Schools competing at the Scripps National Spelling Bee in Maryland wasn't fooled when he was asked to spell an element found in fake diamonds.

Zirconium. Z-I-R-C-O-N-I-U-M. Those nine letters propelled Elliott Husseman to the next round of the bee and one step closer to being named the 92nd Spelling Bee Champion.

“It was crazy. There were cameras all over. I tried not to focus on them. It was, gosh, I was shaking," Husseman, 14, said. "I just thought ‘I’ve got to do this.' I just saw all the people. I imagined my parents were out there in the audience and that kind of helped me stay focued.”

Zirconium (Zr) is an element with properties similar to titanium. Cubic zirconia, the crystaline form of zirconium dioxide, closely resembles diamonds and can be found in costume jewelry.

Despite spelling his first two words correct, Husseman did not advance to the list of finalists after judges combined his spelling performance with his score on a written spelling and vocabulary test.